What would it take to build a “Pacific Rim” robot?

If you haven’t seen the trailer for Pacific Rim, check it out here:

My friend John wanted to know a little more about what it would take to make one for real.

So what would it take to build one for real? Well, according to these stats, the robots in the movie are around 250-280 feet tall. The closest real life analog to that is probably a Virginia class nuclear submarine. A nuclear submarine is slightly longer, but it’s got a similar density of material and technical sophistication that a giant robot might have. This should give you an idea of the scale (those are people standing on the top there): 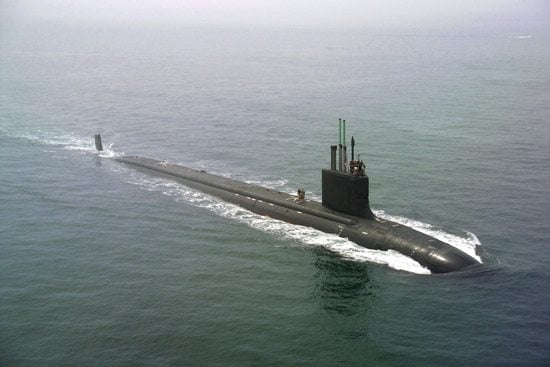 According to the released “schematics” from the movie studio, the robots are powered with a nuclear vortex turbine and the actuators are hydraulic. I’m not sure what a nuclear vortex turbine is, but driving hydraulic actuators with a nuclear reactor isn’t totally implausible. One of the tricks in building a humanoid robot is having REALLY powerful actuators, specifically a large amount of torque. With robots at this scale, limbs will be very heavy and need a lot of torque just to hold still, let alone fight giant monsters. A Virginia class submarine costs $2.6 billion to build (in 2012 dollars). I think a Pacific Rim robot would cost slightly less because it’s a bit smaller and has a smaller armament. Most other things would be surprisingly similar though. It would have similar armor, radar, and communications equipment. And of course, it would have a similar compact nuclear reactor. The S9G reactor onboard a Virginia class submarine can output 29.8 MW and deliver 40,000 shaft horsepower, which would probably be enough to power a Pacific Rim robot.

Now, we’re getting pretty good at building humanoid robots, but it’s very hard to do. Some of humanity’s best humanoid robots so far include Hubo, Petman, Asimo, and the recently revealed Atlas. Walking is hard. It’s not until you’ve tried to make a robot walk that you realize how good humans are at it. I experienced this while working on the DARPA Virtual Robotics Challenge at Georgia Tech. Georgia Tech also has a real humanoid robot performing the DRC tasks (which include turning a valve, smashing down a wall, clearing rubble, using a drill, driving a car, opening a door, and lots of other hard tasks). Unfortunately, I can’t talk about the work being done just yet. Anyway, there are a couple of ways to make a robot walk. One way is using something called ZMP walking. ZMP stands for zero moment point. To make a robot stand up, its center of mass must be within its polygon of support, which is an imaginary 2D plane that ensures there robot remains statically stable. Once the robot starts moving, the challenge is to find a set of trajectories that keeps the robot from losing its balance and falling over. A similar problem in this space is the inverted pendulum problem. The zero moment point is the point where the foot hitting the ground does not produce any horizontal moment and the sum of the vertical inertia and gravity is zero. This is only part of the problem though: you also have to have a path planner that decides where the feet should attempt to land and thus what direction it should walk as well as inverse kinematics (either numeric or analytical) to figure out how to position the actuators in the leg to get the foot to that point. You also will typically have lots of sensors and a feedback loop to be able to take into account external disturbances to the system like an uneven ground or something hitting your robot. After all of that, you end up with a ZMP walk that looks something like this:

That looks much more human. While terribly named, passive dynamic walking can be done without active power. In the video, the robot is being pushed by the engineer which provides it with the energy to walk. Theo Jansen’s Strandbeests are another example of a passive dynamic walker. Real human walking has a component of this to it, as the leg swings rather than remain continuously driven by muscles. However, ZMP walking can look pretty lifelike, as PETMAN shows.

The walking in Pacific Rim looks pretty human like, and we’re meant to believe that walking is teleoperated by the drivers in the head of the robot. Teleoperating the robot with haptic feedback is a pretty cool idea and it’s been done before. However, directly controlling walking like they show in the movie wouldn’t work because the polygon of support and ZMP would be different for a person and the robot since they’re different sizes and densities and have limbs of different lengths. However, there’s still a way it could work. If the teleoperation rig in the head of the robot was only using the human’s legs to determine relative parameters of the ZMP walking algorithm, you would get a similar effect to directly controlling the legs. A ZMP walking algorithm can take in parameters like stride length, duration, and height. By mapping those relative parameters from the operator to the robot, the robot would walk in sync with the operator. According to the movie, there is a brain interface to the robot which is too heavy for a single person, so there are two pilots, one for each brain hemisphere. There’s a great article over at IEEE on how that might work.

To actually construct a Pacific Rim robot, the Vehicle Assembly Building at Kennedy Space Center would be a good spot to put it together. It’s plenty large enough (maybe even big enough for a couple) and has all the necessary cranes and scaffolding as well as doors big enough to get it out once it’s put together. 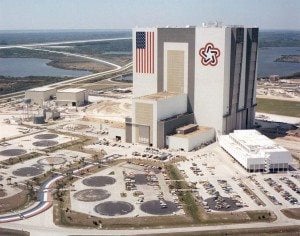 How long would it take to build? Well, a Virginia class submarine takes 9 million man hours to build over 6 years. It also takes 134 people to crew it and control all of the complicated systems to make the submarine function. I think it’s likely that a Pacific Rim robot would require a mission control of a couple people to watch and control other vital systems that the two pilots of the robot couldn’t.